Six years after the Attabad disaster, adaptation is still name of the game!

The mountains of Gilgit Baltistan are like a petulant teenager still trying to find a place. They are still experiencing growing pains and rock and rattle all those around them like the teenager slamming doors. Just like that teenager, they need to be watchful of, because of the potential to do harm.

On this day in 2010, the young Karakorams stretched themselves to release some of their tension, but that one stretch had nightmarish results. The villagers of Gojal valley in Gilgit-Baltistan, heard a rumble, that quickly turned into a roar, the earth trembled, and billows of dust triggered by a huge landslide raced down a disintegrating mountainside, and slammed into the path of the Hunza river down below.

This disaster,  resulted in the loss of 19 precious lives, displacement of thousands of villagers from  Attabad, Shishkat and Gulmit, and complete destruction of many miles of the Karakoram Highway that linked Pakistan to China, and the bridges linking the villages in the valley.

It was not unexpected. This is a seismically active zone. Human activity, especially infrastructure construction disturbs the fragile environment. Humanitarian groups like Focus along with the environmentalist working in that area had been warning the people of the valley below of the widening crevices. Warmer temperatures due to Climate Change have also impacted the integrity of the glaciers in the northern mountains.

The people were warned of the dangers, and  advised to relocate. Many heeded the warning, but not all could. They had no idea where to move. They also had no other alternatives. The political leadership was also reactive and there was no disaster preparedness.

The mountain-side that had fallen into the river had dammed it completely, and soon the accumulated river started forming a lake that encroached on the homes and hearths, and business of the villages, completely submerging the village of Ayeenabad, and parts of Sishkat and adjoining villages.

Only a row of tree tops serves as a haunting reminder of the live that flourished along the banks of the Hunza river. Where people must have tended to their livestock, and reaped the fruits of their harvest. Now, there is an eerie silence of the watery grave of a thriving village.

Today, 6 years later, all the information that one needs of how the disaster was handled, of the evacuations, the airdrops of food and relief supplies, the construction of the spillway to release the rising water threatening to engulf more land is easily searchable.

This is about the people. The people who have been protesting each year on the frozen Attabad lake that was formed in the wake of the disaster. Protesting because promises were not kept. Because relief and rehabilitation did not come in the manner promised. And because 6 years after this disaster, there are still people living in the Altit village in temporary shelters.

People with means moved elsewhere. The paltry sum of 600,000 was given out at one time. Chinese provided them dry rations for a year. Many moved to other villages, started their life anew, set up businesses. But the people who were given temporary shelters in Altit and Karimabad village, some in Gilgit, for six months are still living there after 6 years.

There is a great sense of community in these areas. People help out. The displaced persons in Altit were given these shelters on the land of the small farmers. However, this ‘temporary settlement’ of almost 60 shelters in this small town brings a double jeopardy.

The farmers are without their land; cultivable land which was used for growing potatoes which serve not just as a food but a major cash crop. They were expecting the use of these shelters once the IDPs left, but now they do not even get to benefit from their own land, which they had given temporarily

Most of the people of this area either are farmers, or in the Army. The people displaced from the disaster now do odd jobs to sustain their families, with only the well to do among them having established businesses like shops or transportation services.

They yearn to be in a place of their own. They feel that because they are so few in numbers, they do not even matter to the politicians when they go out seeking votes. The only hope they have is from their National Council of the Ismaili community in Pakistan.

One father spoke of the psycho-sociological effects of this temporary living. Children of the village, brutally honest and blunt as they are, call his children and those of his displaced neighbours as ‘mutasareen’ or disaster affected. He said his child was born in this village, but wants to know the meaning of this label of mutasareen. He can understand it is not being said in a nice way so does not go to school willingly.

Many adapted to the life after disaster. The infrastructure rehabilitation was going to take a long time but there was a daily trek of villagers from Gulmit and upper villages to cross over to Gilgit. This spawned a thriving road and river transportation network that had been unseen and unheard of in those areas.

The awe inspiring pictures of cars and even trucks travelling astride two boats going at synchronized speeds fired the imagination of the adventurous, setting in motion a mini tourist boom. Interestingly though, when asked, this turned out to be a classic case of adaptation.

None of these people had owned boats or ran such a business there before. The locals eased into this earning opportunity as owners of boats, and tourist guides. They know the area so are comfortable in that role. However, water transportation in the upper reaches of the rivers is rare, so this was something they had to learn. Many preferred to outsource it to people who were more adept at this skill.

This is why while they became business owners and operators, the boatmen employed by them were mostly from the nearby Hazara division of Khyber Pakhtunkhwa. No wonder they had features so different from the locals! These became the migrant workers who found livelihood opportunity in a new land.

It is another story now that with the inauguration of the tunnels built through the surrounding mountains by the Chinese, the road link with Karakoram Highway has now been established. 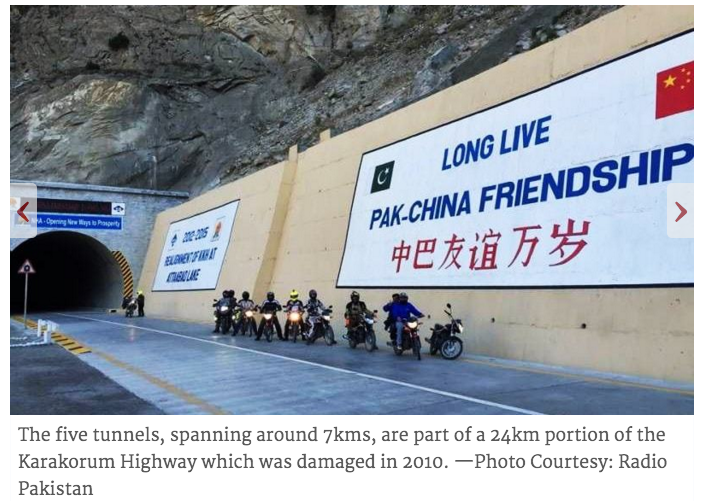 This no doubt meets a great need. But this also means that once again the people have to adapt to another kind of a life when these boats would be used only if tourism is sustained and people want to travel on the stunning blue waters of the lake, surrounded by some of the most captivating peaks.

Those in a hurry will now be using the road going through the Pak-China Friendship Tunnels.

For this to happen, and tourism to thrive, rudimentary facilities around the lake will be needed so it progresses from ‘adventure’ tourism to include the less adventurous, especially as now ease of access is not a problem.

The vistas of breathtaking beauty must be made more accessible. Unless this is done, within a short span of 6 years after the Attabad disaster, the lives of its displaced persons  will be  topsy turvy once again, and they will remain in this cycle of adaptation.

Do they have to protest on the frozen lake every year on the anniversary of the disaster to make themselves heard?

Journalists in the Line of Fire