Mangroves are known as the sentinels of the coast, and Pakistan is blessed to have a growing mangrove cover along its 990 kilometer coast and creeks of the Indus Delta. These mangroves have a very close relation to the humans inhabiting the coast, whose lives they enrich by providing them marine resources as food and livelihood options. 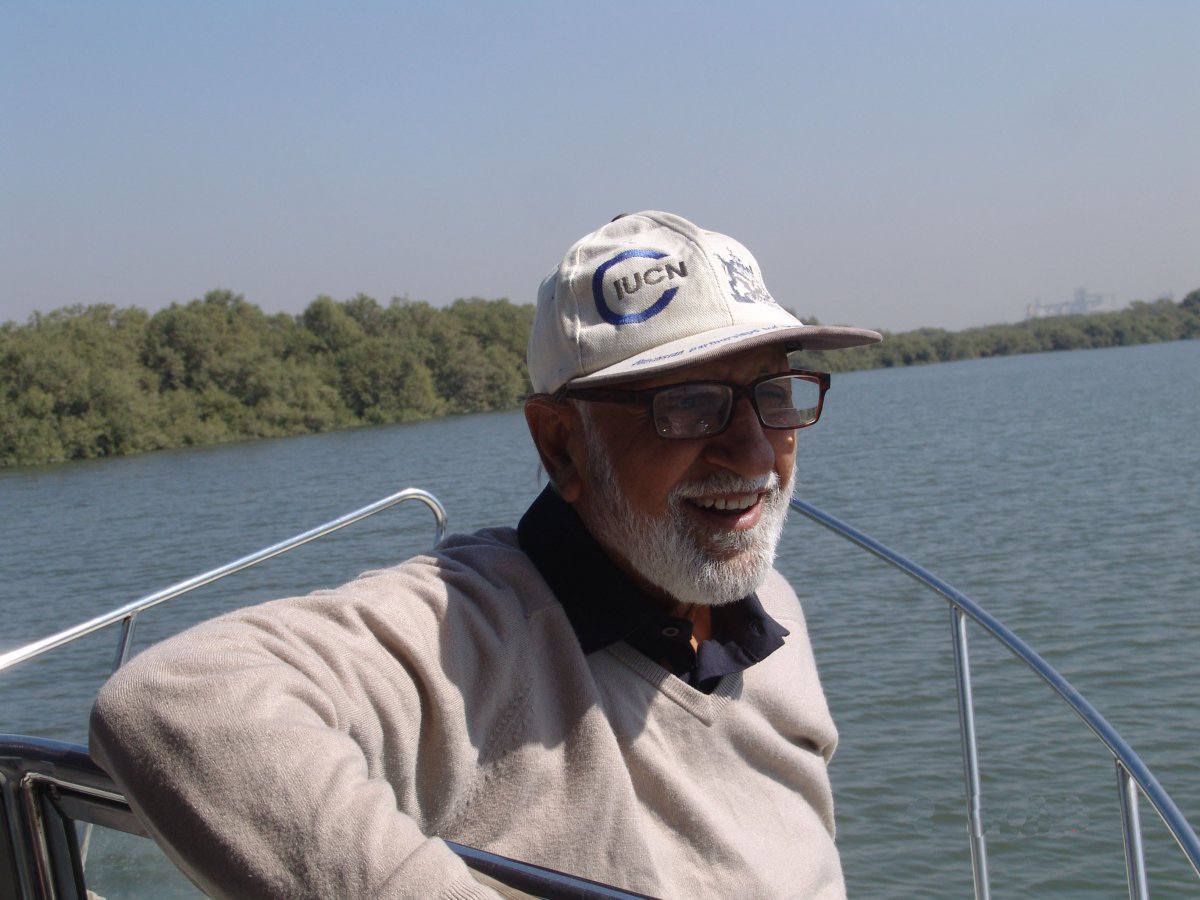 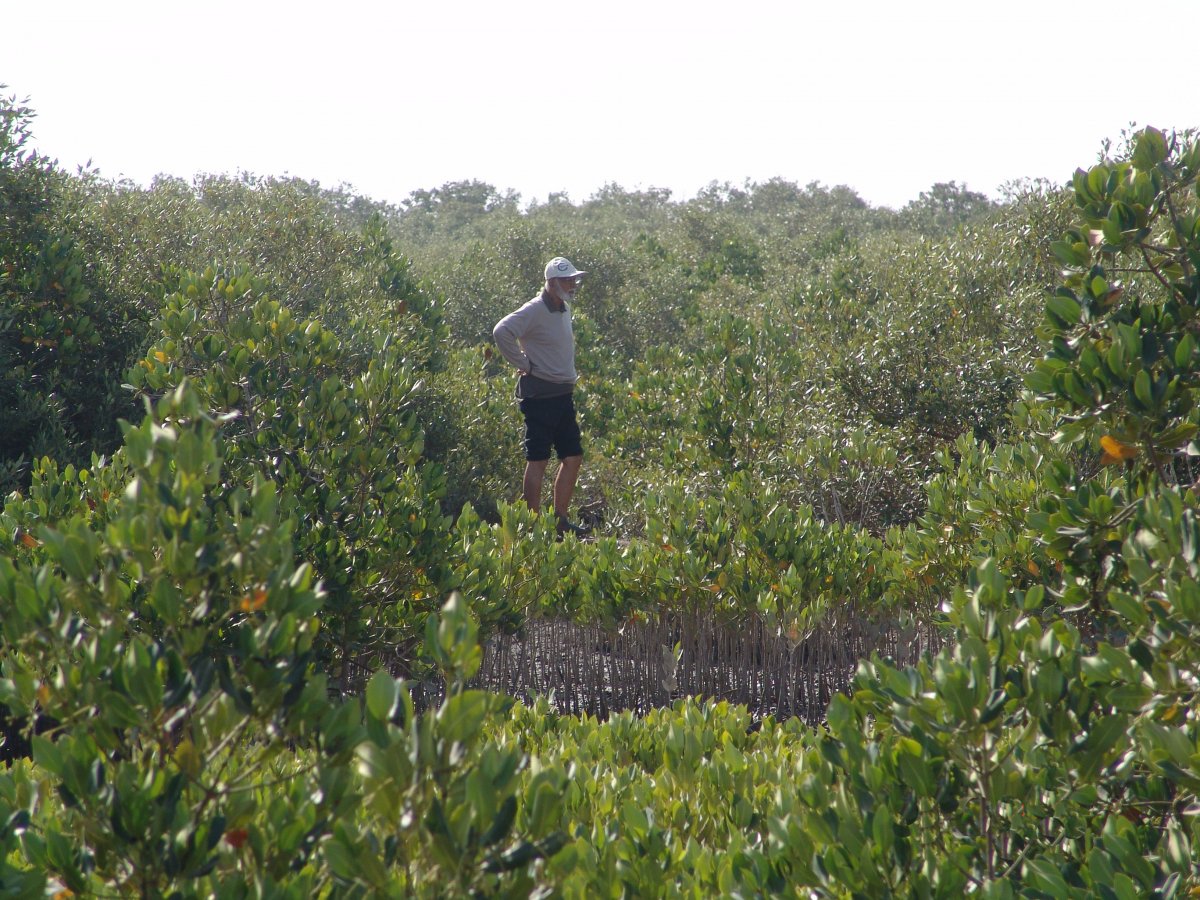 But who enriches these mangroves? Who helps them thrive? Who is passionate and caring about their upbringing as a parent would be? Looking out for their welfare, taking care of their health, owning the bragging rights at their achievements?

People in the forestry and environment fraternity of Pakistan in particular and across the oceans know well the name of Tahir Qureshi, who came to be known as Baba e Mangroves, or, Father of Mangroves because of the manner he invested his passion in preserving and promoting this ecosystem.

The reason I mentioned bragging rights is because I have seen first hand his joy at seeing the mangroves he planted grow and thrive. Born in the town of Shikarpur in the province of Sindh, he graduated from the Pakistan Forest Institute.

A career forester, he joined the Sindh Forest Department and served there until an abduction incident in the Dadu forests. A 60-strong gang, armed with the latest weapons, kept him captive for two nights that seemed to stretch to eternity. However, they released him without ransom when he told them that he was “just a forest officer.” They said since the forests were their sanctuary from the law enforcement agencies, and he was the one responsible for nurturing them, they would let him go without harm!

However, after this incident Tahir Qureshi moved from here and turned his attention towards the coast, and it was here as if he had found his ‘habitat!’

He put in all his efforts to reverse the trend of the shrinking cover of mangroves and traversed the coast far and wide to look for suitable spots to grow new stands with community involvement.

Not that his entry into this ecosystem was smooth sailing either, as each task has its own peculiar challenges. For instance the time when in 1991, his team was ready to return to the shore after completing the day’s plantation work, and the motor of their boat stopped working. The tides had already drifted them away from the delta, pushing them farther out to the sea which was becoming rough.

They decided to send out an SOS by waving a burning cloth tied to the tip of a screwdriver. One after another the team members removed their shirts and burned them. By the time it was Qureshi’s turn, around 3 am, they had reached a patch of delta. An illegal fisherman attempted to rescue them, but when he realized he was in the command area of the Maritime Security Agency, which had spotted him,  left his catch behind and fled away instead of helping them. Finally, the team was able to tow their boat to the shore where a search operation was about to start for them.

Then there was a time when the vehicle he was travelling in was swept away by the spate in the Hingol river in Balochistan, and he had to be rescued downstream by the glass pane of the window being broken and being pulled out.

None of these challenges and hindrances, nor the harshest of weather deterred him.
As his understanding of the mangroves ecosystem grew, so did his penchant for experiments and he attempted plantations in places where they did not occur naturally and including river beds in Balochistan. Through his efforts new artificial mangrove plantations have been brought into being at the new locations after conducting the basic research in Hingol River Delta, Phore River Delta, Shahdi Khor in Pasni and Akra Kaur River Delta in Gwadar, something that is seen as an exemplary breakthrough in the mangroves forestry in the world.

He was not deterred by failure and continued to train a crop of mangrove experts in Sindh and Balochistan and himself led the efforts to reintroduce the species that had been wiped out. He brought Rhizophora Mucronata and Aegiceras Corniculatum. Now all four species are found across the Indus Delta. Ever trying to make things better, he even has a tool modified and crafted, called the Augur to facilitate the rapid digging of holes for planting the mangrove saplings.

He was the moving spirit who convinced the Government of Sindh to declare the Indus Delta as a Protected Area, highlighting it as the largest arid climate mangroves concentration area in the world.

He authored several research papers including a chapter for the World Atlas of Mangroves published by the International Society for Mangrove Ecosystem (ISME) and International Tropical Timber Organization (ITTO),  “Management Plan of Mangrove Forest in Indus Delta”, published by the Government of Sindh and “Coastal Environmental Management Plan” for the Government of Pakistan, National Institute of Oceanography and United Nations ESCAP.

A very self effacing, knowledgeable man, who was always learning, always planning, putting out reports, drafting proposals just so the coverage of the mangroves could increase and the communities dependent on them, and the country could benefit from the thriving ecosystem. He single handedly prepared the Integrated Coastal Zone Management Plan of Pakistan under the Balochistan Partnerships for Sustainable Development programme funded by the Royal Netherlands Embassy that was implemented by IUCN Pakistan during 2007-2013.

Tahir Qureshi was part of the case study on the “Impact of Artificial Flood Releases From Reservoirs to maintain Downstream Wetland Ecosystems and Dependent Livelihoods in Indus Delta” conducted by DFID and Institute of Hydrology and Ecology, U.K.

As a consultant, he worked on a number of assignments, including the Persian Gulf and Red Sea Mangrove Rehabilitation Projects in Saudi Arabia under UNDP-UNESCO regional mangroves project and Islamic Development Bank, Mangrove Scientist-Trainer organized by Karachi University and Ryukyus University, Japan.

Qureshi had also representing IUCN Pakistan on the Wildlife Enquiry Committees for the Government of Sindh and Government of Balochistan in the Ramsar sites declaration process.

He carried within him a love and understanding of the ecosystem and its inhabitants; human and marine. He mingled with the community and was a one person army before he recruited them as his footsoldiers who worked tirelessly under his guidance. His model of community stewardship of the mangroves is being successfully implemented across the mangroves ecosystem.

He went about raising nurseries, and armies of community workers consisting of men women and children from village to village, on the coast and within the creeks of the Indus delta, infecting them with his passion to move from mud flat to mud flat, creating not just a defensive wall but helping create an environment for the marine life to thrive and communities to benefit from the riches the sea had to offer.

He would show off these thriving mangrove stands with childlike delight to whoever came to visit. His narration was a mix of science, art, the passion and sprinkled with stories of yore when these habitats had seen better times.

This quiet, almost shy man who elsewhere would have to be prompted to speak would have people listen to him in rapt attention when he started speaking to people about his beloved mangroves. He had the unique knack of being able to identify his audience and speak to their level of understanding. He was always striving to broaden the constituency that cared for the mangroves so never refused an opportunity to be their advocate.

From ladies horticulture to schoolchildren, from parliamentarians to public public officials, journalists, environmentalists, and the even artists, everyone became a part of his circle of influence and and came away with an understanding of the importance of the mangrove ecosystem.

When speaking at scientific and environmental forums, his was a strident voice calling for the protection of this habitat across the world. It was his expertise which was sought when restoration and rehabilitation plans were being made after the devastating Asian Tsunami of December 2004. He had been requested to provide technical support in establishing mangroves protective plantations in the affected areas in Sri Lanka and Thailand.

Like a true leader, he always attributed his success to his field staff, calling them his biggest strength.

He has also always acknowledged the support that cames from his family, which stuck by him through thick and thin, and cooperated and provided him moral support on his numerous journeys. He always called his wife his “silent partner in crime” who has nurtured his ambition by taking immense pride in his vision and achievements, keeping the family together through his prolonged absences.

This remarkable Mangrove man, or Baba e Mangroves as he is fondly called in Pakistan, transitioned in December 2020, and while his legion of friends, students, colleagues and admirers, alongside his family felt a deep sense of loss, the stands of mangroves along the coast stand a tall testament of this remarkable man’s role in making Pakistan stand out in its efforts at ecosystem restoration,