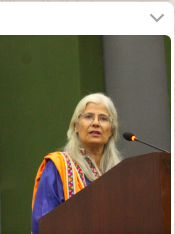 Education: Masters in Geography from the University of Karachi.

Currently, Communications Lead for an alternative education initiative called Badal Do, focusing on teachers training, and teaching at IoBM as visiting faculty.

Also part of the project implementation team for Indus Earth Trust, Water for Women, programme, and the working group set up by the Govt. and IUCN for the establishment of Marine Protected Areas, of which the success was the declaration of Astola Island in Balochistan.

Am  also a professional editor of reports and documents, speak regularly at the media and as a panelist and/or host in seminars and panel discussion on the above topics.

I have been associated with the media in many capacities since 1978 with regular weakly columns articles in Urdu and English Newspapers becoming Pakistan’s first female cricket writer who went on to become editor of The Cricketer magazine in the 80’s and 90’s, and the official publications brought out by the Cricket Board.

Worked at The Star, eveninger of the Dawn group of Newspapers.

Trained and served in the first batch of Pakistan’s female Air Traffic Controllers, and later went on to edit an Aviation and Defence magazine (Wings).

Was editor of an Energy publication in 2001(Energy Update).

Joined Dawnnews which was launched as Pakistan’s first English language channel. Worked as a senior copy editor, Head of Culture Desk and content in charge of its flagship morning show titled Daily Breakfast@Dawn.

Moved to IUCN-Pakistan (International Union for Conservation of Nature) as head of its Education, Communications and Outreach Unit, and also briefly headed their Business and BioDiversity portfolio which required engagement with the corporate sector to promote sustainable practices.

Served as Sindh coordinator of the newly formed Imran Khan Foundation to provide relief, rehabilitation and resettlement to the victims of 2010 floods and 2011 Badin cloudburst.

Became part of a pioneering experiment of a web tv .www.247online.tv that was running in tandem with a blog, Speak for Change taken as a social media multiplier.

In 2014-15 I was appointed as the Project Manager for Pakistan for Google Cultural Institute The project showcased Pakistan’s cultural and historical assets through digital exhibits prepared according to the GCI template.

I have been involved in media development through training of journalists in reporting on environment, climate change, gender, labor, digital security, election reporting, effective use of social media and media ethics, and am also the author of a commissioned research on Media Ethics for Pakistan Press Foundation/Internews.

Have also been a part of trainings and sensitization sessions of school teachers, college and university students, and Government officials on the subjects of Environment, Climate Change and Media matters on behalf of IUCN Pakistan, LEAD Pakistan, Friedrich Naumann Foundation, Greenwich University, Institute of Business Management, NUML, Heinrich Boll Stiftung.

I have held media management trainings for Marie Stopes Society , Unilever Pakistan, Uber– Pakistan and KElectric for their middle and top management.

I am an advisor for National Forum for Environment & Health, Bolo Bhi, a digital rights research policy and advocacy organization, WWF Pakistan, IUCN Commission on Education and Communications, and IUCN CEESP Commission on Environmental, Economic and Social Policy. Am also part of the Core Group for Water Energy & Food Nexus for Sindh created by the Hisaar Foundation.

I am a Trustee of Indus Earth Trust, a rural development organization, The Helpline Trust, which focuses on consumer and civic rights, and Saneeya Hussain Trust that assists in girls’ higher education.

I maintain a blog, but it is more in nature of an archive of my writings, and is still a work in progress. It can be viewed on www.afiasalam.wordpress.com. My older work can be seen in the link to portfolio on http://www.afiasalam.com though I am in the process of migrating it to the blog.