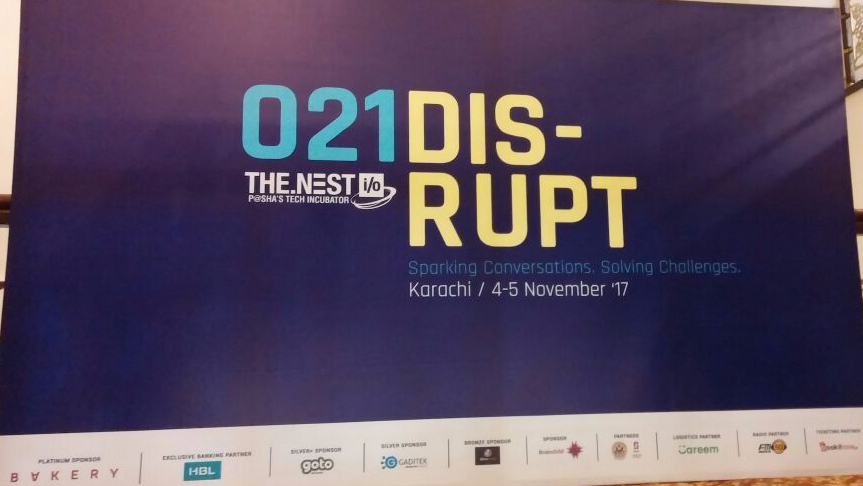 Disrupt? really? Does that raise eyebrows? Were you taken aback? Well let me tell you right off the bat that a dinosaur like me certainly was! God forbid.. bite your tongue, rolling of the eyes so on and so forth!

And that is when I learnt that actually, there is a lot of weight in the saying that ‘understand the context first.’ Well the context of the word disruptive for a dinosaur like me only had negative connotations! It was synonymous with destruction and disturbance. It meant rocking the boat, making waves, kicking people out of their comfort zones. Now I know that makes a lot of people uncomfortable.

But oh well sometimes the company you keep pushes your boundaries. Now I interact with the communities #geeks and #techies, through their guru, my school friend @Jehan Ara who takes them under their wing as the Big Bird at the tech incubator she heads at the @The Nest I/O in #Karachi

This is a fraternity that has spun the meaning of the word on its head and attached all the possible positives with it as they could find. So in their ecosystem, ‘disrupt’ means shaking up an archaic, stagnant system that is not responsive to the needs of the changing times. It means not just bypassing a system that serves more as a stumbling block than as a facilitator, but by charting a new system that democratizes opportunities and takes them to the boundaries of the outliers.

In a connected, shrinking world where technology is making history of so many traditional market places and services, they feel they can get their share of the pie if they strike out like they see small startups making exponential growth at the global level. So many global leaders have emerged out of garages that it gives hopes to the new generation of entrepreneurs who want to tap into the new world that values ideas and knowledge before it looks at anything tangible and physical like a merchandise produced at a physical space.

The energy seen on the opening day of the #021Disrupt Conference hosted by #TheNestiO shows that there are many out there who are not willing to wait for the ‘system’ to fall into place. They want legislation, taxation reforms, infrastructure like incubation centres that provide them the tools, mentorship and investment on a day before yesterday basis.

They got to hear from the experts.. on tech startup who made it big, from technology giants like google about the tools available to help them, from venture capitalists who informed them how perception management of the country is important. They were unanimous in their opinion that that was the responsibility of the entire ecosystem to do that.

The encouraging thing is the size of the Pakistan market because of its population size. This is why it stands a good chance to draw in investment, just like India, Indonesia. Turkey, East Africa and Middle East will also draw it but Middle East’s total population maybe large but is divided in 22 countries.

Pakistan is a growing market with a lot of potential for investment eventually. However, local investment will attract global funding. Before that there needs to be an ecosystem that needs to shed its cumbersome regulatory top down approach. There are many grey areas that need to be navigated as far as SECP and FBR are concerned.

One common thread from the The payment cycle for start ups is one of the main reasons for failure, aside from a lack of a good enough team. But interconnected to the issue of payment is the route of payment as #Paypal still is not there and the #fintech solutions being worked through the State Bank of Pakistan need to be easier to use.

On the subject of failure, which cropped up repeatedly in the conversations of various panelists, the common theme was to view it as a learning process. But the learning also needs to be at the end of the venture capitalists which need to be data driven. Also all digital innovation has mostly been adopted not by the traditionalists but by the fringe.

The encouraging note was that a market need is assessed, and solution to meet it was provided, and then came the connection with the regulator. If it was done the other way around, it would probably be a non starter.

And this is why people like Dr. Umar Saif are so valuable where they are at the moment as they have gone with an understanding of the ecosystem into the corridors of power to disrupt the hidebound structures there. The only problem is, there aren’t enough such persons in #Pakistan with the clout needed to accelerate the disruption if we do not want to stay stuck in playing the game of catch!

So just a quarter of the proceedings done, and this dinosaur has now understood a new meaning of disruption, and understanding it as something really positive, and needed. So come on folks, let us disrupt Pakistan so propel it forward and leave the stagnant pool behind.

With some of the best Venture Capital firms meeting startups at the 021Disrupt, this opportunity is something the tech sector was just waiting for to get that much needed leg up. Let us see how they are able to capitalize on it.