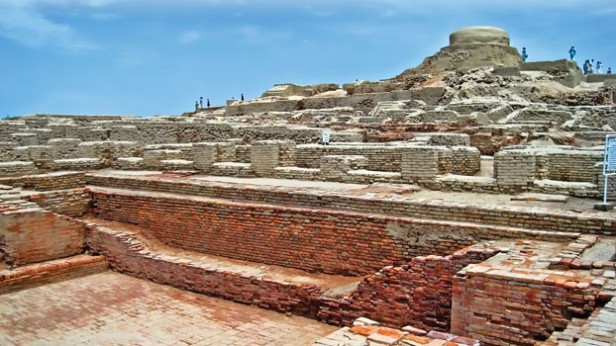 Granted that a country, which is not able to take care of its living, is hardly likely to put its archaeological heritage on top of its priority list. However, it is about time attention was diverted towards this important issue.

To be fair, there was a time when Pakistan showcased its heritage for the world to see. And very proudly so. Over the years seven of its sites were included in the Unesco World Heritage site list:

• Fort and Shalamar Gardens in Lahore

Their unique importance in world history has been the reason for their inclusion. They are monitored carefully by the world body. Even the global importance of the other remains of previous civilizations has kept many international organizations and scholars interested in them and they and their state of preservation have been well documented.

Before the confusion created by the half-baked 18th Amendment kicked in and made a mish mash of the devolved, capacity-challenged provincial set-up, the Federal Archaeology Department under the Ministry of Culture, was taking care of all sites and explorations. Now, it is scratching its head trying to ensure that this heritage does not just crumble away.

However, the vagaries of time and weather are not the only phenomenon that one needs to worry about. There is also the looming specter of climate change that must be factored in all future plans for renovation and preservation of these sites.

Pakistan is already facing the impact through shifting monsoon patterns and frequent flooding and other natural disasters like cyclones. But are we looking at how these will impact monuments and ancient settlements? How can we help save our history from being wiped out?

When the Director General of Archaeology, Dr. Fazal Dad Kakar was asked about this, he said:

“In terms of actual effects on archaeology and the historic environment, climate change will have direct impact from rising sea levels and coastal erosion; more frequent storms and heavy rainfall episodes; flooding, landslips and erosion; changing seasonal patterns; drought and drying out of wetlands and archaeological sites.

The environment in which archaeological material is found is of great significance for how the material is protected. Climate change will also affect archaeological sites in different ways, depending on whether they are in air, earth, ice, snow or water.

Temperature rise, especially the melting of glaciers and rising sea levels are also expected to take their toll on the archaeological sites like Banbhore which are situated in coastal areas.

Rainfall and flooding due to climate change is already undermining the fragile earthen fabric of the World Heritage site of Mohenjo-Daro and other archaeological sites situated in the Indus Basin.

Of special concern is the fact that climate change may jeopardize the conservation of precious evidences whose existence is not even known today.

After devolution thanks to the 18th Amendment, archaeological sites handed over to the provinces are at risk, because, no uniform policy for protection and preservation of the cultural heritage sites has so far been formulated at the national level.

At present, cultural heritage sites and monuments are at the mercy of administrators and so-called conservationists. Their work is far removed from all norms and principles of conservation and integrity of the sites has been compromised. There should be a national strategy for protection of the cultural heritage from all human and naturally devastating elements.”

This certainly paints a pretty dismal picture of the situation on ground. Lack of cohesive national planning in matters that transcend provincial, even national boundaries is putting this valuable heritage at great risk.

To try and understand what exactly are the threats that the monuments and other historical treasures may face, Piquespoke to Dr. Pervaiz Amir, a climate change expert and member of the Prime Minister’s Task Force on Climate change.

According to him, “even if looked at within Pakistan’s context, the climatic factors like snow, ice, fog, flash floods and sea level rise are likely to have a negative impact on the archaeological sites in different parts of Pakistan. While there is a danger that we may lose the ones located in Thatta and Badin completely, the elements mentioned here will enhance the effects of ice and snow, which are going to be particularly damaging to our sites and monuments in the northern regions due to the severity of weathering on the monuments.

“Similarly, fog, when it moves to the plains of Sindh will have an adverse effect on the structures, just as the extremely high temperatures will damage the brick and marble surfaces, and dull the tile works as is used in Multan and Sindh.

“Also, the shifting pattern of rainfall, as has been experienced this year and increase in its quantity and the resultant flash floods pose yet another threat. Over the long term however, we must be mindful of the period of impending drought likely to bring up salt content in the soil, which again would be damaging to the structures.

“Other than these climatic factors, one must look at the human dimension of the problem, too. Climate change is likely to result in human migration to safer places, and the pressure on resources will make it difficult to save the archaeological sites from human encroachments.”

These are dire warnings indeed, and need to be heeded on an urgent basis. There cannot be a piecemeal, province wise solution to things that require strategic thinking on a national level. Greater thought should have gone into the fallout of the 18th Amendment that devolved subjects like environment and archaeology to the provinces.

When Pique asked Shahid Sayeed Khan, Director of Indus Earth Trust, and an environmental architect, to explain how the changing climate can impact the archaeological sites, he said:

“The changing climate is not only affecting flora and fauna but also the built environment, especially our heritage which, in some instances, dates back more than 3000BC.

Excessive rainfall and floods have already affected Mohenjo-Daro and Harappa. For years, the problem in these locations, was and still is excessive salinity which increases as the land gets water logged.

Drought has had the same affect on some of our legendary forts that are adjacent to deserts and salt ranges. Lack of moisture crumbles the stone or brick over time till it loses its strength, causing collapse of entire walls and roofs.

Soil erosion is perhaps, the greatest threat to our heritage. Naturally, if foundations are weakened the entire structure of a building is affected. Excessive water or the lack of it is now becoming apparent in Pakistan as it is now classified as one of five countries most affected by climate change.”

So what is it that can be done and who will do it? With the system of governance in disarray, whose help can Pakistan elicit to save these treasures for posterity?

Jawed Ali Khan, the Director General Environment, Ministry of Climate Change, had this to say:

“This is indeed a very important aspect towards which attention had not been paid in the past but it certainly deserves attention. Just as any other infrastructure or settlement is likely to be affected by the ravages of climate change, so will our archaeological sites across Pakistan.

Maybe organizations like Unesco can set up a fund that will address this important issue. We need experts to look into the threats that the archaeological heritage of Pakistan faces because this is a shared heritage of universal value.”

Dr. Harald Hauptmann of Heidelberg Academy of Sciences and Humanities

Research Unit Karakorum and archaeological expert on the Chilas heritage, told Pique: “Possible impact of climate change on archaeological heritage is a difficult theme. Organic materials such as manuscripts or wooden artifacts are better preserved in dry environments such as deserts or even in regions such as around Gilgit or Chilas, but increasing humidity as we noticed this summer will have an effect on those archaeological remains. But, there will be no damage on architectural remains or rock carvings along the Upper Indus. The danger for this historical heritage is caused by building activities, the upgrading of the KKH and future dam projects.”

All the experts Pique spoke to acknowledged that climate change poses a clear and present danger to the archeological treasure of Pakistan. What we need now is some action plan that can map out the threats, and chart a way forward to combat them.

Pakistan is home to some of the oldest civilizations the world has known.

•Balochistan has cave paintings that date back to 18,000BC.

• Soan Valley has revealed the existence of Paleolithic sites, while the land is dotted with evidences of Mesolithic andNeolithic settlements.

• Mehergarh, which flourished about 7000 years ago, Indus Valley Civilization, whose towns of Mohenjo-Daro and Harappawere models of urban planning 5,500 years ago.

• Asoka left his edicts on obelisks, and we have temples at Hinglaj, in agar Parkar, at Katas Raj.

• The Buddhists rock carvings and monasteries and universities dot the valley that came to be known as Gandhara afterthem.

• The Muslims left relics like Bhambore, Makli, the beautiful tiled mausoleums of saints dotting the plains of Sindh andPunjab, the grand forts, palaces, mosques and final resting places of their pets, patriarchs, matriarchs, mentors andmistresses. Very few other countries can boast of such a diverse archaeological, historical and cultural richness.

On the global vulnerability index prepared by global agencies, Pakistan is right at the top in terms of likely climate change impact. In the words of the environmentalists, Pakistan is a ‘multi-threat’ country. Threats Pakistan is likely to face:

•Glacial melting in the northern areas will lead to flooding down stream.

• Loss of water source in north to result in drought in plains, especially the breadbasket.

• Rising temperatures will contribute to desertification.

This article was originally published in PIQUE.

One Life, One Chance?

Benazir.. the woman, the mother, the Prime Minister… the martyr!